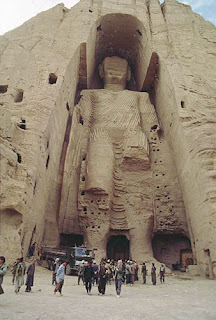 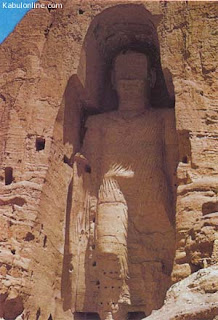 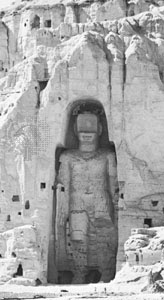 Here is some information on the Giant Buddhas:

The two colossal statues of Buddha carved into the sandstone cliffs of Bamiyan, Afghanistan, were demolished by the Taleban on March 2001. The Taleban people is a fundamentalist Islamic militia that has governed most of Aghanistan from 1996 to December 2001.

Against international protests and appeals, the supreme Taleban leader Mullah Mohammed Omar ordered their destruction as part of a campaign to rid the land of all un-Islamic graven images. The leader issued an edict declaring the statues (and therefore the ancient Buddhas) as insulting to Islam. This means that all idolatrous images of humans and animals and all those idols considered by them to be an insult to Islam had to be destroyed.

By March 12, 2001, these giant Buddhas had been destroyed by the use of mortars, dynamite, tanks, anti-aircraft weapons and rockets. Now they are nothing but piles of sandstone rubble and clay plaster

...The Buddha is not God or even one among many gods. During his lifetime of 80 years, Buddha Sakyamuni only allowed his image to be recorded as a reflection in rippling water. Images of the Buddha himself did not appear for at least 400 years after his death and even then were created only to remind followers of their own innate "Buddha Nature."

see you later,
gord.
Posted by gordon coombes at 10:16 PM